Is the Impossible Burger ACTUALLY vegan?!

I’m sure everyone has heard of the Impossible Burger by now. Even fast-food giant Burger King is serving up this plant-based meat alternative patty now, not to mention White Castle, Red Robin, Apple Bee’s, The Cheesecake Factory, and even Little Caesar’s Pizza! The Impossible Burger is made by Impossible Foods, an organization that began in 2011 with the intention of completely replacing the use of animals in food production. They only have one product now which is the Impossible Burger meat, currently sold in restaurants and select grocery stores in the states (check out where to find it here). If you haven’t tried it yet, the general consensus is that it tastes remarkably, almost eerily like a conventional burger made from beef. What are the ingredients in the Impossible Burger that make it taste SO much like actual meat and why don’t other veggie burgers on the market taste like this? Is it safe for human consumption? Is it even 100% vegan?! Let’s take a look at the ingredients and cover the controversy!

How Does the Impossible Burger Compare to a Meat-Based Patty Nutritionally ? 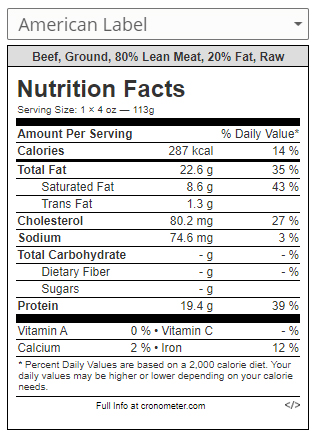 The Impossible Burger nutrition facts, which I pulled right from the Impossible Foods website, are pretty comparable to what you’d expect for an 80/20 beef patty, which is pretty common to be used to make hamburgers. Most fast food places like Burger King and McDonald’s use an even fattier burger, with about 30% of calories coming from fat (70/30). Those cuts would look even worse in comparison! Regardless, comparing the Impossible Burger label to an 80/20 hamburger patty (sourced from Cronometer.com) shows that the Impossible Burger is 47 less calories per 113g (4 Oz) serving, has 8.6 less grams of total fat, 0 cholesterol compared to about 80 mg in the beef, about the same amount of protein (19 grams each), and the Impossible patty also has 3 grams of fiber. The sodium content is about 300 mg higher in the Impossible Burger at 370 mg per serving but most people do add more salt when cooking burgers with ground beef, regardless. The saturated fat content is also comparable at about 8 grams each. Prolonged periods of higher dietary saturated fat intake is associated with potential cardiovascular implications (Hooper, 2015) so neither of these should be considered healthy to consume on a regular basis.
One other thing worth nothing is that the 80/20 beef does contain trans fat and the Impossible Burger contains 0. The trans fat in the beef is naturally occurring and differs from industrial trans fat in its chemical structure. Industrial trans fats are partially-hydrogenated artificial oils that are chemically altered to stay solid at room temperature and have been found in countless studies to be harmful to cardiovascular health when consumed regularly (Wang, 2017, Zhu, 2019). Ruminant trans fats, or the naturally-occuring trans fat that can be found in food products from cows, sheep, goats and so on, do not currently appear to have the same health detriments when consumed in moderate amounts. However, when consumed in excess, they do appear to raise lipid levels (Kuhnt, 2016).
A leaner cut of beef would compare a bit more favorably to the Impossible Burger in terms of the nutritional profile on paper but the Impossible Burger is meant to replace the average fast-food or restaurant burger, which is generally on the fattier side. In the future, maybe Impossible Foods will offer several “leanness” options. Neither a beef patty or the Impossible Burger should be considered a healthy food option for various reasons, but I don’t think many people eating these foods are eating them thinking that they’re healthier than a big salad, for instance. Choosing the Impossible Burger over a beef patty has the advantage of no cholesterol, less water usage and land to produce, and of course, no cow is needed.

Ingredients Breakdown in the Impossible Burger

The main ingredients here are pretty common in any other mock meat burger. Tons of mock meat is made from soy protein so nothing to be surprised about there! Soy protein provides a chewy, meaty texture with high protein and low fat and although it was previously plagued with myths, it’s a great plant-based protein option. The coconut oil was most likely mainly added because of its saturated fat content. Burgers made from actual beef contain high amounts of saturated fat (unless they’re particularly lean) and saturated fat solidifies when cooled. The sunflower oil was probably added for texture purposes and to provide more of a “sizzle” and the natural flavors are obviously there to make it taste like a conventional burger.
The rest of the remaining ingredients make up only 2% or less of the burger beyond those few ingredients. The methylcellulose and food starch are used as binders to hold everything together. Methylcellulose is a type of insoluble fiber that probably contributes to most of the burgers fiber content and most people eating a lot of meat could definitely use more fiber! The Potato Protein, Yeast Extract, Cultured Dextrose, Salt, Soy Protein Isolate were added for taste and consistency purposes.
The Impossible Burger is also fortified with quite a few vitamins and minerals, as you can see in the ingredients list. The B vitamins and zinc are congruent with the amount found in ground beef and actually likely contributes a bit to the overall flavor of the burger. Regardless, if people are eating Impossible Meat as a substitute for beef then it’s helpful that the Vitamin B12 was added. Excluding supplementation, Vitamin B12 is mainly found in animal products in its active form and it’s important to regularly get enough B12. The other B vitamins and zinc that are added in can’t hurt either!
Now, the real ingredient here that really makes the Impossible Burger stand out is the Soy Leghemoglobin. Pretty interesting name right there but it actually just stands for legume hemoglobin. Leghemoglobin is a naturally occurring substance found in the roots of leguminous plants and regulates the oxygen and nitric oxide to help the plant thrive (Fraser, 2018)(Gupta, 2011). Impossible Foods has found a way to make this plant-based heme from fermentation of genetically-engineered yeast. Yay, science! The reason why this ingredient is key to the success of the Impossible burger is because animal-based meat is known to be particularly high in heme iron and contributes to its unique, meaty flavor. This bioidentical heme iron that Impossible Foods has discovered how to genetically engineer allows their food products to taste extremely similar to meat while greatly reducing the environmental impact. However, this ingredient has stirred up a lot of controversy…

Impossible Foods discovered how to genetically engineer this Soy Leghemoglobin ingredient. They voluntarily chose to test their new ingredient on animals and a lot of animal rights activists obviously have problems that a supposedly vegan company made this decision. In recent times, animal testing has become more and more of a taboo and rightfully so, at least in my personal opinion. Testing on animals is often an incredibly cruel procedure and the results may not even be applicable to human beings because of obvious differences in biochemistry. However, if you’re eating ANY degree of processed foods (or really just using ANY modern products, for that matter), chances are some of those ingredients were tested on animals as well.
Impossible Foods chose to test on animals in order to participate in the FDA’s food safety program. The FDA requires that any new ingredient must be tested rigorously in order to receive their seal of approval. Companies must submit a GRAS designation https://www.fda.gov/food/food-ingredients-packaging/generally-recognized-safe-gras (Generally Recognized as Safe) which is basically a collection of scientific data validating the safety of the ingredient in question. Experimentation on animals is basically required to authenticate the data in the eyes of the FDA and there seems to be no loophole for this yet. The GRAS determination is then submitted to the FDA for review and consequently approved or denied. If approved, the FDA sends a “no questions” letter which is basically the FDA’s seal of approval for the safety of the product. Many major retailers require this to sell a product in their stores. It’s also very important to be able to sell the product internationally and additionally offers the company a bit more “protection” from competitors trying to get their product off the market. Impossible Foods wasn’t technically required to receive the FDA’s approval for their new ingredient but in order for the company to have any degree of success with their product in the long run, it was a necessary move. The good news is that Impossible HAS received their “no questions” letter from the FDA and is now able to sell their product in stores around the world. Overall, the amount of animal lives that Impossible Foods will be saving in the long run with their animal product alternatives is overwhelming. Although other companies claim completely cruelty-free or that they never tested on animals, it’s almost unavoidable that they all use ingredients that have been tested on animals at SOME point. They just didn’t conduct the studies themselves. I personally don’t see much of a difference.
…But seriously, almost every ingredient that you can imagine has been tested on animals at some point. Pea protein, soy, hemp, rice protein, plant-based lecithins, annatto extract, spirulina, flaxseed, anything with artificial colors, caffeine, carrageenan, corn starch and corn syrup, sucrose, and sodium chloride, just to name a literal few. Sodium chloride, guys. That’s table salt. Good luck avoiding that if you ever eat out or eat anything even remotely processed! For a full list of ingredients that have the GRAS seal of approval, click here
I understand how people may hear that Impossible Foods approved animal testing for their new ingredient and come to the conclusion that they’re not really a vegan-friendly company but the issue is more systemic in nature, as stated above. The FDA runs on a system that basically requires new ingredients to be tested on animals for the product to have any real degree of commercial success. Whether or not this system is necessary for human safety is a whole other topic in general. Impossible Foods has already saved countless animal lives with their Impossible Burger substitute that is predominantly experiencing so much success because of just how much it tastes like meat. Soy Leghemoglobin is a key component to its success and if no ‘one-time’ animal testing ever occurred for this ingredient to be approved, I would argue that many more animal lives would have been lost.

The Impossible Burger compares favorably to an 80/20 beef patty, which is commonly used in restaurants, but contains 0 cholesterol, 3 grams of fiber and no ruminant trans fat. It also requires less land use, water use, and no cow must be slaughtered to provide the burger. Although Impossible Foods had to put its unique ingredient, ‘Soy Leghemoglobin’, through a procedure that involved animal testing to be sold commercially with success on a global scale, the product has still saved the lives of countless cows with only a little over a year on the market. The soy leghemoglobin is an essential part to the Impossible burger standing out in terms of taste and has compelled millions of people to choose to swap this plant-based burger into their diet in exchange for other meat. With the Impossible burger tasting so similarly to a traditional beef patty along with the other benefits for the animals, environment and possibly even your health, why not make the switch over for people who haven’t already?!